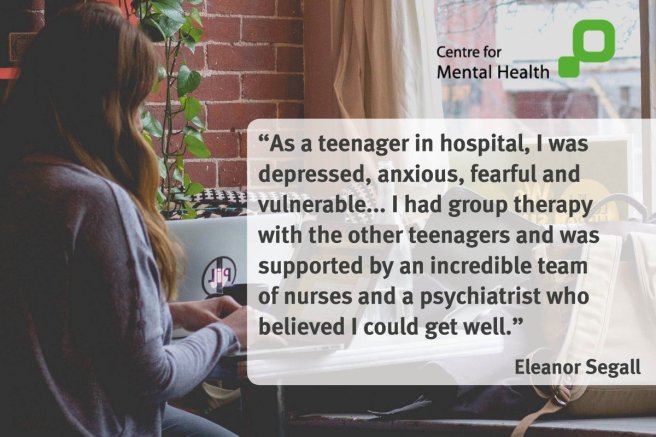 ‘Like so many sharing their stories this World Bipolar Day, I have lived experience of bipolar disorder. I am now 30, but was just 16 when I was diagnosed with bipolar 1 (the most severe form of the mood disorder) as an inpatient at the Priory Hospital North London. It was hard to deal with this diagnosis at such a young age and I didn’t know then what my future would hold. I was hospitalised due to having three episodes of illness: mania and depression in one year, which led to psychosis, where my mind lost touch with reality.

Bipolar is a serious mental illness that causes a change in mood states to either big manic highs or devastating depressive lows, with a normal state of functioning between episodes. As someone living with this, I also have experienced psychosis during my mania which needs quick hospitalisation as my mind spirals wildly out of control. I have been hospitalised twice for my bipolar (in 2004 and 2014), both times due to an extreme episode of mania and psychosis.

As a teenager in hospital, I was depressed, anxious, fearful and vulnerable. I believed (falsely) that I had been sexually abused and my reality became based on this false belief (delusions). The doctors got me back to full health through a combination of starting on new medicine (mood stabilisers) and giving me anti-psychotic medication to bring me down from the mania. Over four months I also had one to one therapy, group therapy with the other teenagers in the adolescent unit and was supported by an incredible team of nurses and a psychiatrist who believed I could get well. I eventually went home once my mind was stable and started a long process of counselling and recovery.

I was able to go to university and get my degrees, travel, make friends, date and live my life. However, in 2013, after some life stressors, I began to experience a depression which featured suicidal thinking. It was very scary and we believe it is because my medicine Carbamazepine wasn’t working any more as I got older.

Depression of this kind is incredibly hard to deal with. I stayed in bed all day most days with breaks for meals. I had no energy, no hope, no reason to get up. I was unmotivated and couldn’t cope with life. I barely washed or spoke to friends. Luckily, due to my fears about the suicidal thoughts, I shared this with my family and medical team. I didn’t want to act on it, just escape from the pain my mind was in.

Unfortunately, a few months later, the depression turned into a period of mania, possibly caused by my mood stabiliser not working and taking anti-depressants. This is always a risk with bipolar, that medicine can send you high. I was agitated, speaking very fast, with racing thoughts, raised libido and was vulnerable as a result. The psychosis then started, with my mind starting to believe falsely that I was being held by a criminal gang orchestrated by my family. It was so scary. I was sectioned, treated with medication again and over several months engaged with therapy in hospital, while they tried to bring my mood and mind back to lucidity.’

Tomorrow, join in and learn what you can about bipolar disorder.

As many of you know, I have bipolar 1 disorder and when not on medication, have episodes of high mood- mania/ psychosis and low mood- severe depression. Thankfully I am in recovery but it affects so many people and is thought to run in families.

Remember you are not alone.