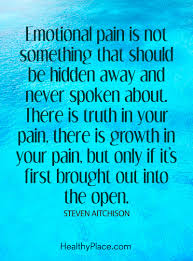 And it did explain a lot. I thoroughly enjoy (in a very, very weird way) telling people that I am emotionally unstable. Diagnosed. Got the paperwork. Makes them quite uncomfortable, makes me cackle like a little pixie. Obviously, I don’t just go around telling strangers that, it’s always in context of the situation. But for some reason, although the people I love are more than happy to discuss depression and anxiety, when it comes to personality disorders they start ‘shuffling’.

But I’m not about to shy away from talking about BPD and my lived experience of it, because it’s only through understanding other people’s experiences that we learn anything.

I came here today to bust through one misconception in particular. One that I definitely held for a long time, and one that I only dropped when I read more about Borderline Personality Disorder and how it can manifest in different people.

Most people think of BPD as the person ‘acting out’.

They think of the disorder as being very outwards and visible. There’s horror story after horror story sensationalising the ‘classic’ borderline personality disorder on the internet – all written from the perspective of someone who doesn’t actually have it. But knows someone who does. It’s horrendous, and it’s awful, and it taints many people’s perceptions of what BPD actually is.

My lived experience is very different, and it wasn’t until I came across some articles on The Mighty detailing what ‘quiet’ BPD is that I truly began to understand how my brain works, and how my BPD manifests. This is not to say that it’s any ‘better’ than classic BPD.

This is just to say that nobody has the same lived experience as everyone else, and that’s why we need a mix of stories and voices all telling their own unique stories about the same disorders. That new coat of fresh paint on the same topic adds something to the narrative.

This is my lived experience.

For me, my BPD manifests itself internally. On the outside, I look reasonably ‘sane’ and ‘put together’. The inside is a maelstrom of thoughts and emotions that are hard to understand, hard to deal with, and consistent. Honestly, if I could crack my head open and let all the thoughts that are constantly throwing themselves around my brain out, everyone I know would be shocked.

I still have the same impulsivity, self-injurious behaviours, fears of being abandoned, mood swings, and black and white feeling that people with classic BPD have. But instead of ‘acting out’, I ‘act in’.

I often describe BPD as having no emotional skin. Where something might affect you slightly, it affects me completely. Like touching an exposed nerve ending, every feeling is intensely strong and always too much. It’s exhausting to always feel everything to such an intense level.

It does make relationships hard. But I don’t lash out at the person, I lash out at myself. It’s self-destructive in a way that nothing else really is. I’ve had to work very hard to keep my thoughts and feelings internal in the fear that if the people I love knew how I truly felt, they’d leave me immediately. My life is a constant whirlwind of convincing myself that everyone hates me, that everyone is going to leave, and then finding a rational moment and remembering that people don’t hate me.

I want to believe I am a good person, but I don’t yet know if it’s true. Quiet BPD is just as hard to deal with as classic BPD, but you probably wouldn’t know it from the outside. I would never take out my feelings on people I know, because that’s just not me. I will, however, take them out on myself. I will distance myself from people without them realising why.  I will be trying, 90% of the time, to please people to make them like me.

It’s hard to admit what’s going on in my head. But it’s because it’s so hard that I do it, and I continue to push through and talk about the really difficult bits of mental illness. Without these conversations, none of us would know what people go through – and then we’ve got a problem.

This article was written by Cordelia Moor for Time to Talk Day 2019. Cordelia can be found at www.cordeliamoor.com